Today’s post is special, and the quote we’ve selected is a clue to what’s so special about it. So if you can figure our where the quote is from, then you’ll easily figure out the significance of this post.

“The captain’s cries of pain at the loss of his son are more frightening to the enemy than the deepest battle drums.” – Bible or Not?

Recognize this picture? It’s a clue – do you know the answer yet? 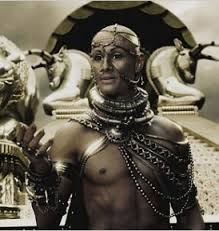 OK, here’s another picture that should totally give it away. 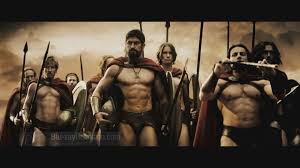 The quote about the captain’s cry of pain is from the movie 300 (Warner Brothers 2006) starring Gerard Butler as King Leonidas, Lena Headey as Queen Gorgo and Rodrigo Santoro as Xerxes (pictured above). And that’s the answer to my original question…

Today’s Bible or Not blog post is our 300th. There are many quotes from the movie 300 that are tough Bible or Not quotes, sounding very Biblical. Here are just a few:

“Listen to your fellow Greek. He can attest to the divine one’s generosity. Despite your several insults, despite your horrid blasphemies, the lord of hosts is prepared to forgive all, and more, to reward your service.” – Movie 300 Quote, Persian General

“The captain’s cries of pain at the loss of his son are more frightening to the enemy than the deepest battle drums.” – Movie 300 Quote, Dilios

“There will be no glory in your sacrifice. I will erase even the memory of Sparta from the histories!” – Movie 300 Quote, Xerxes

“The world will know that free men stood against a tyrant, that few stood against many, and before this battle was over, even a god-king can bleed.” – Movie 300 Quote, King Leonidas

“You have many slaves, Xerxes, but few warriors. It won’t be long before they fear my spears more than your whips.” – Movie 300 Quote, King Leonidas

“Freedom isn’t free at all, that it comes with the highest of costs. The cost of blood.” – Movie 300 Quote, Queen Gorgo

You can get the full movie details at IMDB.